Koodalmanikyam Temple is one of the famous Hindu temples, located at Irinjalakuda, in Thrissur. Koodalmanikyam is the only temple in India, where the brother of Rama, Bharata, is worshiped. 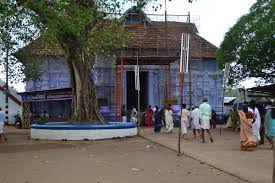 The eastern entrance called the gopuram has been built according to the Kerala-style architecture and is spread 10 acres across the land with magnificent gates on all the sides. Its extra white and bright walls add extraordinary beauty to the temple. The temple courtyard is huge and very spacious too such that it can easily accommodate around twenty two elephants.

In Kerala there is a tradition of performing poojas at five levels on three sivelis in one day, in almost all of the Hindu temples, but in Koodalmanikyam Temple this ritual is not necessary. The temple has four ponds; Kuttan Kulam is the largest out of the four, Kulipini Theertham is inside the temple premises, then Kulipini Theertham and Kulipini Maharshi, the devotes can bathe in all the three ponds except Kulipini Theertham.

In the month of October and November a festival called Thriputari on the Thiruvonam is celebrated.

On this day, newly harvested rice called Mukkudi is first cooked and offered to the god; it is believed to be the medicine of all problems. It is the ayurvedic mixture prescribed by one of the Astavaidyas. The annual festival at the Temple, held for 11 days in April-May, is a well-known popular event in central Kerala. Thousands of people from all over the world come to see the pageant of colour, music and fine arts which can be only seen in Kerala.

Lotus garland, popularly known as Thamaramala is an important offering to the deity. A garland is around twelve feet long and will have not less than 101 lotus flowers which are mandatory. Only flower petals are used to make the garland. The floral offerings to the god are of Lotus, Tulsi and Chethi. No other flower except these is taken for pooja or for making garlands

How to Reach the temple

From the airport: - It’s easy to reach Koodalmanikyam Temple from any medium of transport be it railways or from airport. This temple is 45 Kms away from the international airport located in Kochi called, Nedumbassery.

Bus services:- To reach the temple there are bus services available from Kochi. You can take a private bus at Moonupeedika in case you’re coming from Kozhikode and if you are coming from south that is NH 17 route then you have to board the bus from Kodungallur to reach the temple. Buses are available at every 5 minutes from Thrissur to Kodungallur.